The second seminar of the Social Media Volunteers for Heritage programme was held from 10-15 September 2017 in Ossmannstedt near Weimar, Germany. Ten new volunteers based in 10 countries across Europe – Bulgaria, Estonia, Germany, Poland, Portugal, Romania, Russia, Spain, Switzerland and the United Kingdom – joined the programme run by Europa Nostra and the European Heritage Volunteers . The seminar was composed of special visits to Weimar and Erfurt, presentations on the European Year of Cultural Heritage, how to write heritage stories for the Heritage Times website, how to blog and use social media, and group discussions on cultural heritage.

The new participants have a variety of backgrounds including archeology, architecture, industrial heritage, museums, heritage tours and heritage organisations. 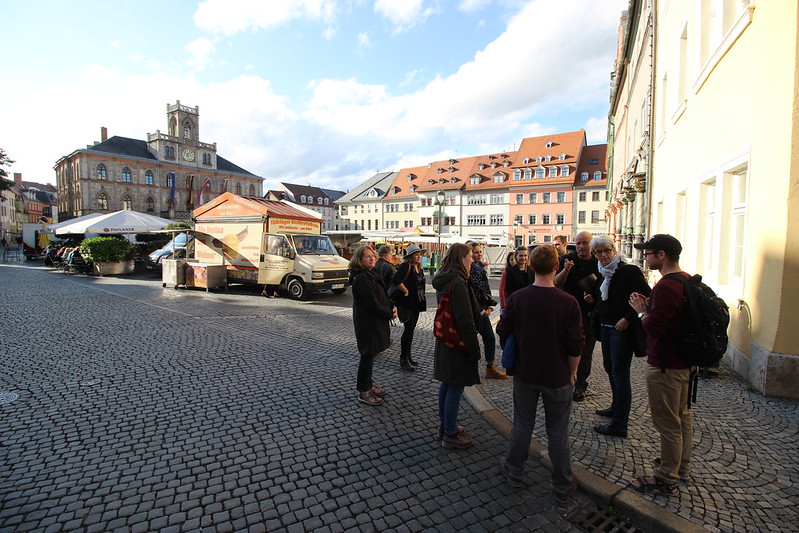 During a visit to the historical centre of the World Heritage city of Weimar the multilayered aspects of Weimar’s heritage were presented by the director of Weimar-Jena-Academy Uta Tannhäuser. The city of Erfurt offered an example of a medieval town with rich and diverse heritage and the volunteers met with the team responsible for the application to inscribe ‘Erfurt’s Jewish Heritage’ in the UNESCO World Heritage List.

The volunteers worked on their stories and presented and discussed them with the group. In the next few weeks the profiles of the new volunteers and new stories will be added on the Heritage Times website.

The living bridge between the first and the second group of volunteers is Jacopo Ibello from Italy who attended the first seminar in Ossmannstedt from 28 August to 2 September 2016. The first group is composed of 12 participants from 12 countries, namely Albania, Belgium, Croatia, France, Germany, Greece, Italy, Latvia, Norway, Portugal, Spain and Turkey.

Social Media Volunteers for Heritage is part of Europa Nostra’s network project ‘Sharing Heritage – Sharing Values’, which has the support of the Creative Europe programme of the European Union.